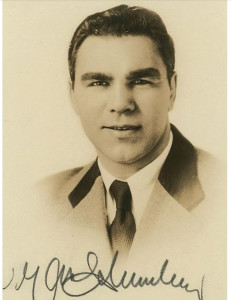 Mostly remembered for his boxing exploits, heavyweight champion Max Schmeling remains unjustly associated with Nazi Germany. But, as a matter of fact, he was a gentleman and also a hero that saved lives during the Holocaust.
With all the German boxing titles in his pocket, Schmeling arrived in New York in 1929. There, he won the world title on 19 June 1936 by defeating Joe Louis, one of the greatest boxers of all times. Despite Schmeling s unwillingness to be used as Hitler s puppet, the Nazi regime presented the victory as a triumph of the Aryan supremacy.
The rematch took place on 22 June 1938 before a crowd of 70,000 people. Within two minutes and four seconds of the first round Schmeling was knocked out after facing an onslaught of unrelenting savagery from the black American champion.
However, Schmeling was a great champion for what he did out, rather than on, the ring. During the Nazi pogrom against the Jews that took place on 9 and 10 November 1938, erroneously labeled with the naive name of  "Kristallnacht", he saved the lives of two Jewish boys: Henry and Werner Lewin. He hid the boys in a safe place in his suite at the Excelsior Hotel Berlin and, days later, when the fury of the pogrom had subsided, he helped the youngsters escape to the United States.
After leaving boxing he remained a popular and respected figure. In 1957 he acquired a Coca Cola bottling license in Hamburg and became one of the most important German philanthropists. He cultivated comradeship and his former rivals became his friends. He helped Joe Louis throughout his life and even after his death: he paid the funeral service of the old, friendly foe.
He died at age 99, on 2 February 2005.
Eduardo Eurnekian
Baruch Tenembaum
The Raoul Wallenberg Foundation
www.raoulwallenberg.net
Tags: Այլ, Հետաքրքիր է, Նամականի, հղումներ.կապ.համագործակցություն
Subscribe